Chris Singfield traveled from England to California to spend her spring and summer volunteering with Yosemite’s bird-banding program. She’s been capturing observations from her experience, and we’re delighted to share them with you! Chris wrote this first update during her initial training with the avian research team in May. 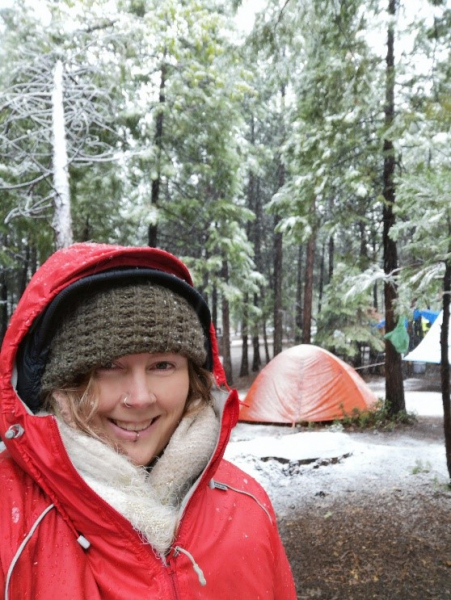 May 22, 2019 — Welcome to the Yosemite MAPS bird-banding blog for the 2019 summer season. Hailing from the UK, I’m Chris writing to you from our currently snowy campground in Hodgdon Meadow! Fat snowflakes drifting slowly to the ground brings out the excited child in me and there is nothing more magical than getting to see Yosemite covered in a white dusting of snow, although I’ll admit it’s pretty chilly.

What is MAPS, you say? MAPS stands for Monitoring Avian Productivity and Survivorship. There are hundreds of MAPS stations that operate across North America. Every MAPS station collects data on breeding bird populations in a standardized way to help researchers learn more about birds and gather information that will allow us to protect them better. The MAPS station here at Yosemite National Park has been operating for 30 years and is the longest-running station of its kind. It’s a privilege to be here!

I’ve always wanted to visit Yosemite National Park, and the National Park Service’s International Volunteer in Parks (IVIP) program has provided me with the perfect opportunity to combine my career break from my current job, as a marine conservation adviser for England’s countryside agency, with my rather rusty bird-banding skills, from a previous internship with the Institute for Bird Populations (IBP) in Oregon.

This summer, I will be working with IBP biologist Amanda and IBP volunteers Amy and Lyndsi to gather information on songbirds at seven locations in Yosemite. We’ll use nets to carefully capture birds. We’ll tag each bird using an aluminum band, determine its sex and age, and collect a variety of other data for future analysis before releasing it back into the air. We’ll also assess habitat structure and complete a list of breeding birds for each location.

This spring, Amy, Lyndsi and I have been training together to learn how to band birds. We’re also learning how to identify different species and determine each bird’s gender and age. 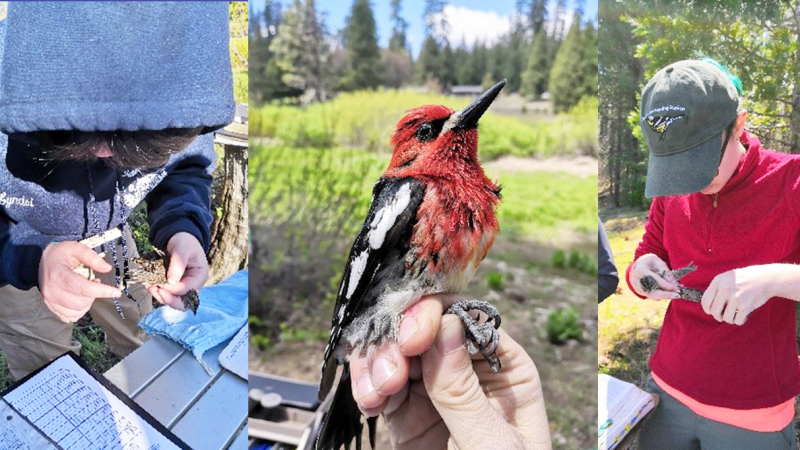 I’ve already gotten to see some of my favourite birds: the WIWA, also known as the Wilson’s warbler (pictured above, during a training trip to Point Reyes — who couldn’t fall in love with that teeny brightly coloured songbird?), and the glorious red-breasted sapsucker. We also caught and banded a couple of green-tailed towhees, which are rarely detected at any of the Yosemite stations, and we recorded the first fly-over of a bald eagle since the park’s MAPS stations began 30 years ago. 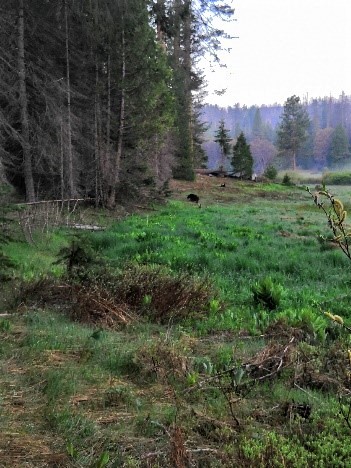 In addition to practicing our banding skills, we’ve spent time finding and setting up net locations at five of our seven study sites. Two of our higher-elevation sites are still inaccessible due to snow, so we’ll set up those nets a little later in the season.

And in other wildlife news … I got to see my first black bear in the park, an exciting and slightly terrifying experience!

The bear initially moved away, but then came right back. We decided it would be safest to leave the bear to its business and return another day. Between bears, torrential rain and snow, it has been difficult to get out and practice our banding skills, but we have made the most of the opportunities we’ve had. We’re looking forward to better weather and starting our first period of data collection.

Thanks to Yosemite Conservancy for contributing toward funding for my position.

And thank you, Chris, for volunteering — and for sharing a behind-the-scenes look at what it’s like to participate in Yosemite’s bird-banding program! We’re grateful to our donors for supporting this long-running research effort.

Each MAPS bird-banding season consists of 10 periods between May and early August, with each period lasting 10 days. Yosemite’s bird team starts in the third period (late May); other stations at lower elevations or lower latitudes might start earlier, to align with the breeding season for birds in their area. Don’t miss Chris’s update from her first official round of banding!