Yosemite would not exist without water. From the jagged peaks of Cathedral Rocks to the smooth curve of Half Dome, this is a land carved by slow-moving glaciers. The iconic valleys and cliffs; polished granite slopes, lakes, and moraines; and dynamic waterfalls can all be attributed to ancient ice.

California has a Mediterranean climate, receiving the most precipitation in the winter. That precipitation comes as rain at lower elevations and snow at higher elevations. In Yosemite, which reaches the dizzying heights of just over 13,000 feet at Mt. Lyell, the snow amasses to become snowpack. In general, precipitation at 6,000 feet and higher falls as snow from October through April, and as temperatures warm and winter storms subdue, that snow melts and becomes the fast-moving lifeblood of the park, sustaining every aspect of the ecosystem. Due to climate change, the water cycle is undergoing change before our eyes. 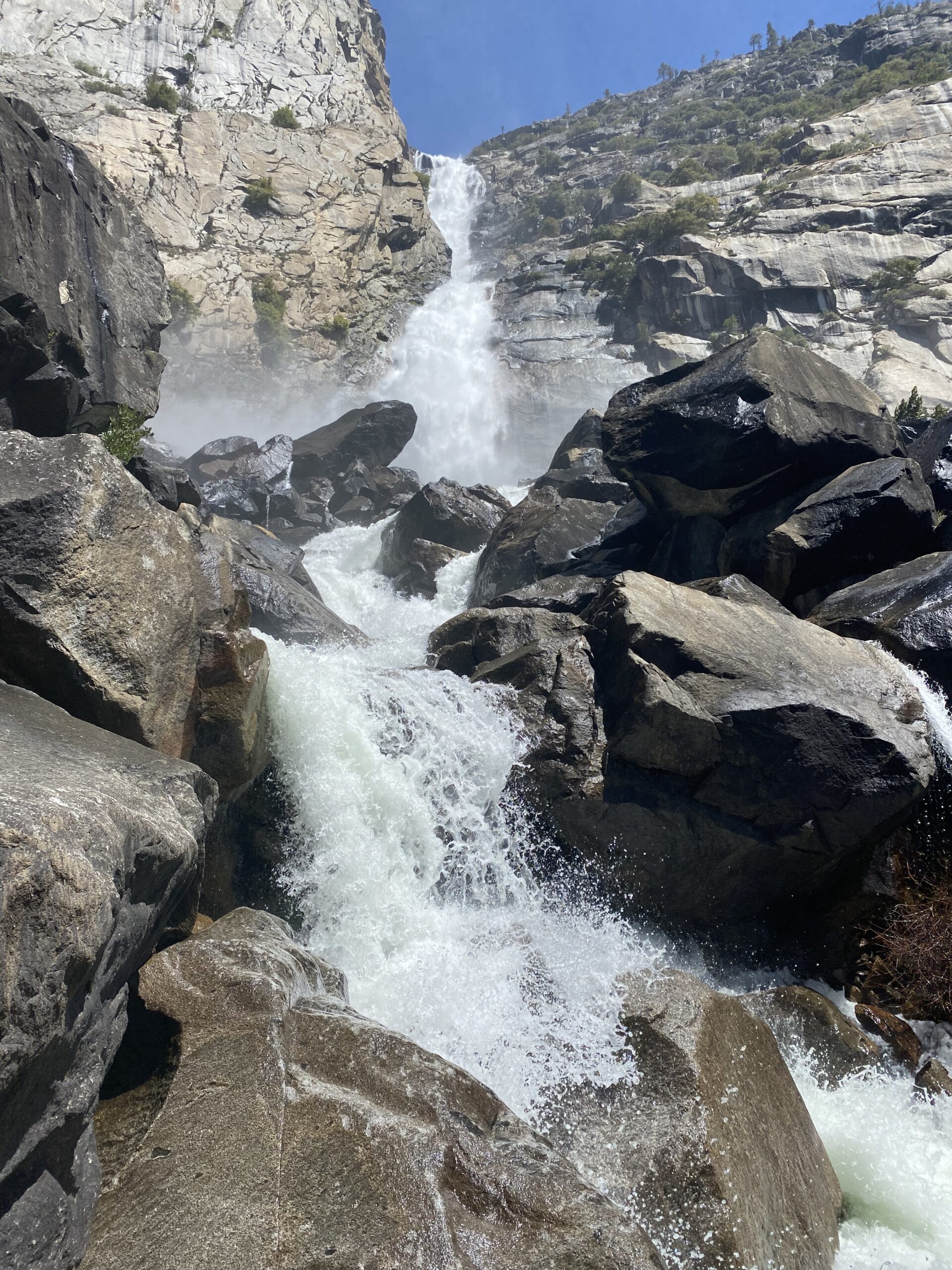 Each year, as the season shifts from winter to spring, Yosemite’s snow melts and fills the Valley once more with the sound of rushing water, as it shoots over the towering granite. Waterfalls revive, the rivers refill, and the season awakens ecosystems. Image: Gretchen Roecker

Beginning in the Yosemite high country as precipitation, both the Tuolumne and the Merced rivers flow out of the Sierra and into the Central Valley. From there, they support species and landscapes all the way to the Pacific Ocean. The water you see cascading over Yosemite Falls and thundering into the river will find itself among the fruits and vegetables of the Central Valley, which in turn, will travel around the world. Once water falls on the landscape in Yosemite, it, too, travels to different places: It can be stored in the snowpack, infiltrate groundwater systems, or fill aquifers — such as the one in Yosemite Valley that provides drinking water for the main area of the park.

“There’s water moving across the whole landscape, both on the surface and unseen underground,” says park hydrologist Cat Fong. “It’s expressed as springs, or it comes up underneath meadows, which often exist due to the strong supply of groundwater.”

With donor support, Fong is developing an inventory of Yosemite’s springs to determine how resilient the  various groundwater systems may be and how that will affect the ecosystems that depend on them, including meadows and streams. The park has conservation strategies for water: While the Valley is well supplied, Wawona and Tuolumne aren’t.

“From the streams, in the case of Tuolumne, it’s the Dana Fork and the Lyell Fork; for the Merced, it’s the South Fork we have to keep an eye on,” Fong says. “During droughts, we monitor those streams closely, because their levels trigger water conservation measures that kick in if the stream gets too low.”

The lush meadows of the Valley and the snow and ice of the high country are critical for the survival of countless ecosystems, but as winters become warmer and summers become drier, what does this mean for the future of the landscape? Can Yosemite continue to sustain itself?

To understand the future of water in the park, we look high up at remaining glaciers and snowfields. Park geologist Greg Stock knows more about them than most; he has been studying Yosemite’s ice for 20 years.

“We see less and less glacier contribution in years of meager snowpack and a warm summer,” Stock says. “In late summer, the glaciers provide more than half the water in Tuolumne Meadows. Fast forward 10–15 years, and those glaciers will likely be gone.”

Yosemite’s glaciers have been studied for almost as long as there have been European-Americans in the area;  John Muir and Galen Clark measured the snow back in the 1860s. Glaciers form when fallen snow accumulates so much weight that the lowest layers transform into ice. Gently — and very slowly — they begin to move downhill.

As a direct result of drought, glaciers are disappearing rapidly. In fact, Yosemite only has one living glacier left: Maclure. In 2012, researchers found that Lyell glacier was no longer moving, and therefore, was no longer technically a glacier.

Stock is assessing the remaining ice fields and glaciers. Many snowfields are gone from the landscape — perhaps the first time in history that certain areas have not been covered with ice and snow. Stock’s team will be studying Mt. Florence this year, installing probes to measure the discharge of water. Learning how much water comes from the snowfields is essential for understanding the implications of their absence.

“[Snow lines] will probably increase hundreds to thousands of feet, depending on the amount of warming,” Fong says. “We have atmospheric river events that provide a lot of the precipitation we receive throughout the entire year, but during droughts, those are sporadic and harder to predict.”

For example, this past year, Yosemite saw record precipitation October–January, but it was followed by an extremely dry spring, precluding a solid snowpack.

“We’re expecting more atmospheric rivers, because with warmer temperatures, there’s more moisture  and energy in the air, which increases the possibility of greater floods,” Fong adds. 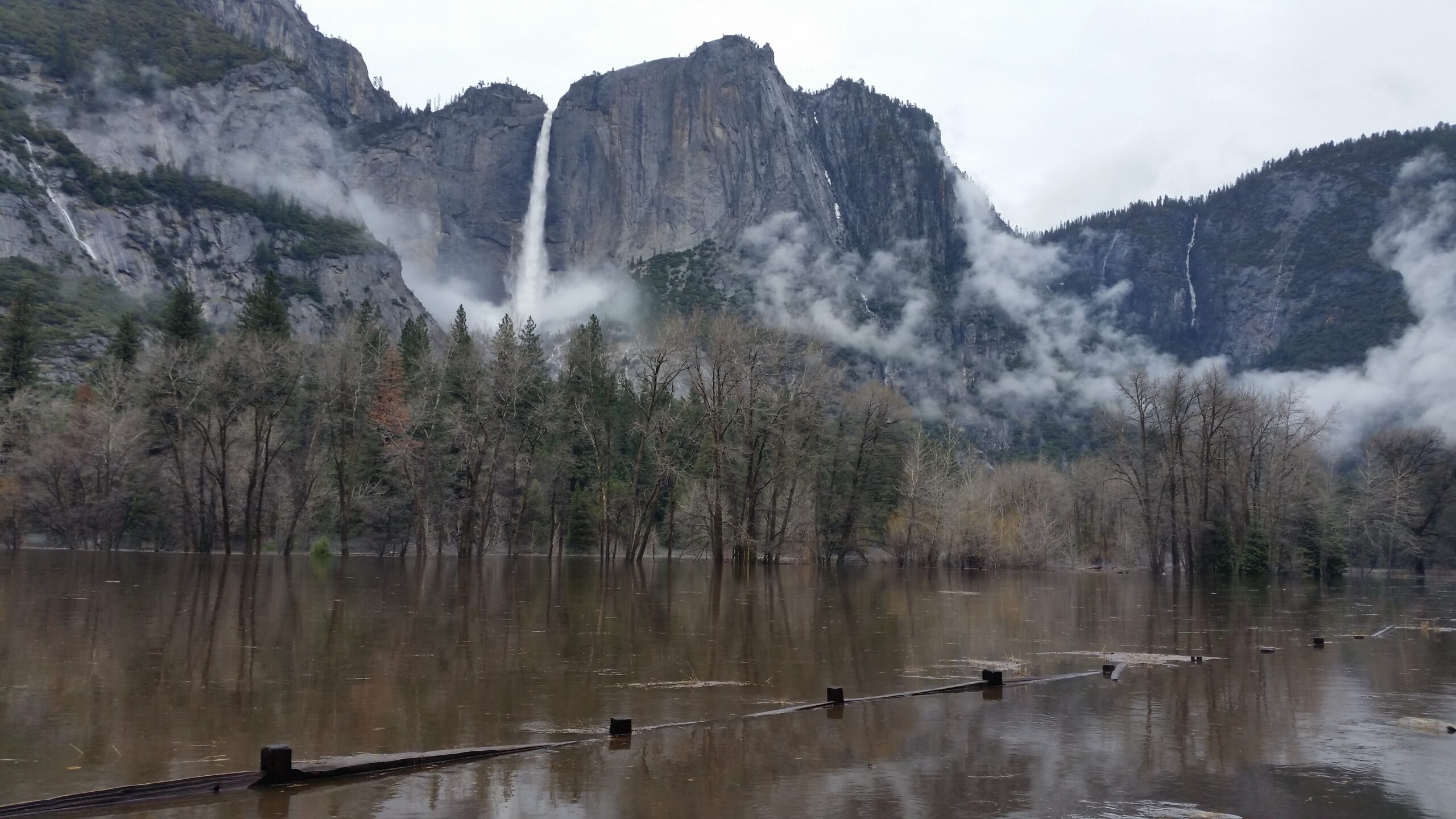 Flooding in Cooks Meadow April 2018. A major rainstorm prompted Yosemite to close the Valley to visitation. The Merced River crested at 13.73 feet (4 feet over flood stage), and park roads and meadows were submerged. Photo: NPS

The Weight of Water

Flooding in Yosemite Valley is common. As the snowpack begins to melt in spring, water levels rise, spilling over the banks of the Merced and flooding the surrounding meadows. Many habitats even depend on periodic flooding to scour flora, and ecosystems are remarkably robust in restoring after floods. Meadows act like sponges, holding onto water and ensuring the ground is less susceptible to surface runoff.

In early 1997, an atmospheric river descended on Yosemite Valley, dropping more than 20 inches of precipitation in a few days, causing the Merced to burst

its banks and flood the Valley. The river reached a depth of 13 feet at Happy Isles, swelling to more than 23 feet by the time it reached Pohono Bridge.

The storm was unusual in that the air was unseasonably warm, so precipitation fell as rain instead of snow at higher elevations. This led to what is known as a “rain on snow” event, which caused the deep snow to melt and fill the waterways. With the sheer weight of water that moved across the landscape, many cliffs in Yosemite became waterfalls. The storm stranded more than 2,000 visitors and park staff, and damaged vital infrastructure including highways and sewers.

“We haven’t put much effort into preparing for a 1,000-year flood,” Stock says. “But the probability of those are changing. In the near future, those could become 100- or 50-year events. Everybody needs to do more on this front. In some ways, the ’97 flood was a wakeup call that helped Yosemite prepare for future storms.”

Yosemite had to assess risk of similar floods and future-proof the park as best they could, which meant elevating roads, fortifying bridges, and establishing robust evacuation systems based around forecasts. Since 1997, forecasting has become more precise and can predict not only weather events, but also projected runoff.

“Forecasts are good,” Stock notes. “They tend to understand well what the [river] peak will be. We have good maps and models that can tell us what the height at the bridge will be. Yosemite has been preemptively evacuated a couple of times.”

“When the water shortage hit, we were delighted to be able to take part in making it possible for [Stock] to do key research in snowpack, taking the guesswork out of predicting future summer water availability,” Ben says. “Predictability was the key ingredient that attracted us. Ever since the Intergovernmental Panel on Climate Change started compiling data on climate change in the new millennium, rigorous scientific predictability has become our main passion.”

While it is challenging to imagine Yosemite with less snow and ice — and consequently, less water — it’s important to recognize how well prepared the park is to adapt and adjust as the climate changes. Thanks, in part, to support from Conservancy donors, Yosemite has a robust staff of hydrologists researching the effects of the changing climate and developing strategies to manage a Valley that floods more frequently.

“We understand the importance of figuring out where Yosemite’s water is coming from,” Stock says. “Yosemite Conservancy is great at supporting those efforts.”

This story features in the Yosemite Conservancy Magazine, Autumn/Winter 2022. It was written by Megan Orpwood-Russell.