In February 2020, Yosemite Conservancy supporter Paul Boyd-Batstone, Ph.D., joined a group of fellow park fans for an Outdoor Adventure in Mariposa Grove. In this guest post, he describes the experience of hiking and learning among the sequoias with naturalist Shirley Spencer.

February is one of our favorite times to visit Yosemite. It can be either snow-packed in shades of blue, white and gray, or unseasonably warm in hues of reds, browns and yellows. My wife, Nancy, and I have enjoyed hikes and snowshoeing at this time in past years. We’ve snowshoed from Badger Pass to Dewey Point, hiked Crane Flat among the meadows and sequoias, and snowshoed the old stagecoach road at the base of El Capitan, each time with a Yosemite Conservancy expert guide.

This year, we hiked the Mariposa Grove of Giant Sequoias with Shirley Spencer, a renowned botanist, author and artist with over 40 years of experience in Yosemite. (In 2017, Yosemite Conservancy published Shirley’s book Living Among Giants: Botanical Treasures of a Sequoia Grove, an author-illustrated guide to the flora found in the shade of Yosemite’s sequoias.) 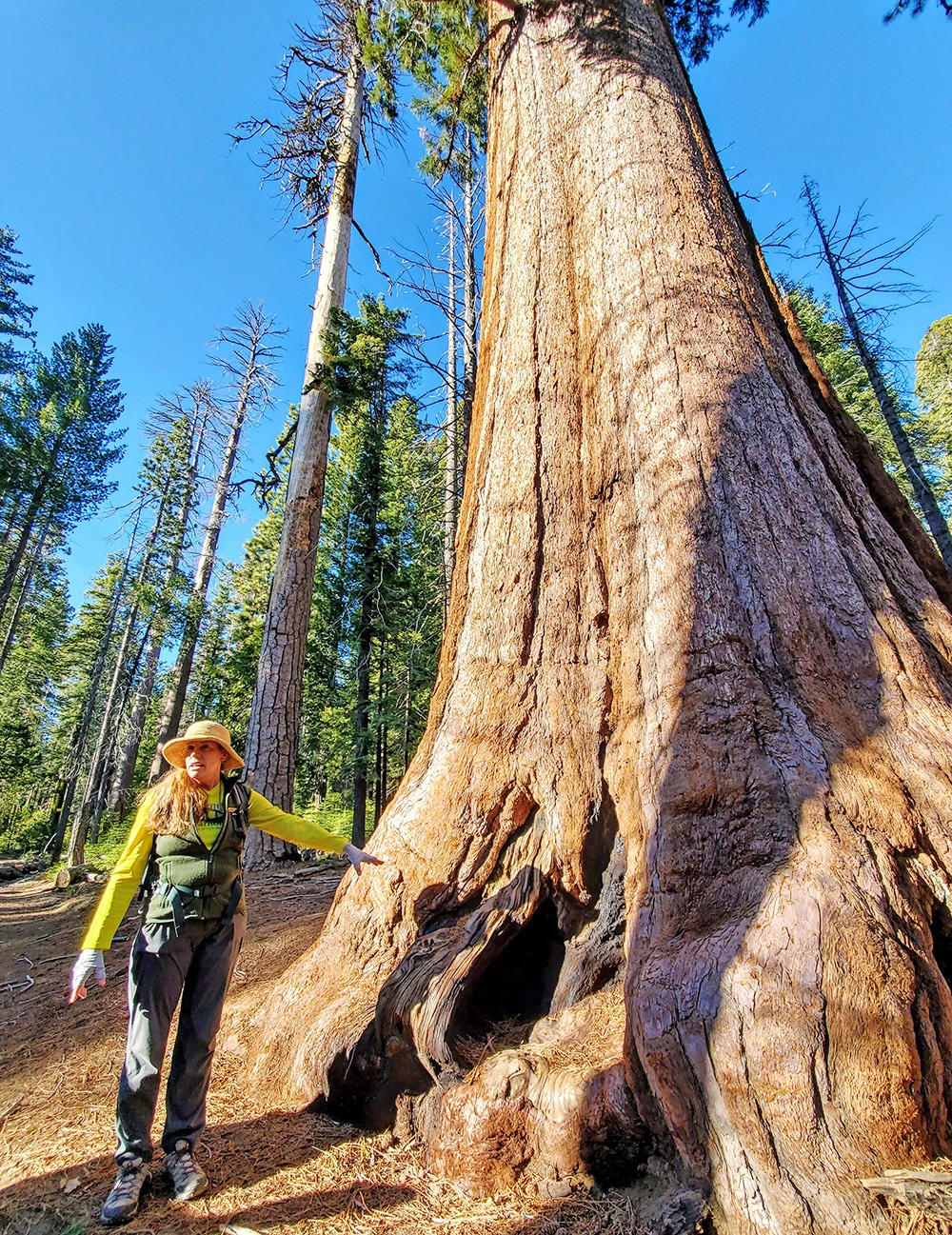 We gathered at 9 am on Saturday, February 1, 2020. It was a bright, clear and crisp morning that promised to warm later in the afternoon. Our group consisted of eight hikers with inquiring minds. We hailed from the San Francisco Bay Area, Southern California, New York and Connecticut. Shirley and her husband, Mark, and her fellow Conservancy naturalist, Andrea Canapary, served as guides. We were set with day packs that included trail mix, lunch and several liters of water.  Shirley gave a brief overview of the day’s events and showed us a map of the planned route and possible alternate trails we might take.

From the Mariposa Grove Welcome Plaza, we took the Washburn Trail, which skirts the southern rim of the grove. As we walked, Shirley pointed out indigenous plants such as greenleaf and whiteleaf manzanitas, which have rust-colored bark that appears to be painted on the branches. She told us the various names and background stories of a shrub called “mountain misery,” “bear clover,” or the Miwok “kit-kit-dizze.” According to Shirley, Basque shepherds named the plant “mountain misery” because its hairy stems and sticky residue would cling to their sheep and dogs, leaving a strong aromatic scent that was tedious to remove. Some called it “stinky” or “earthy.” Shirley said, “To me, it smells like Wawona.” 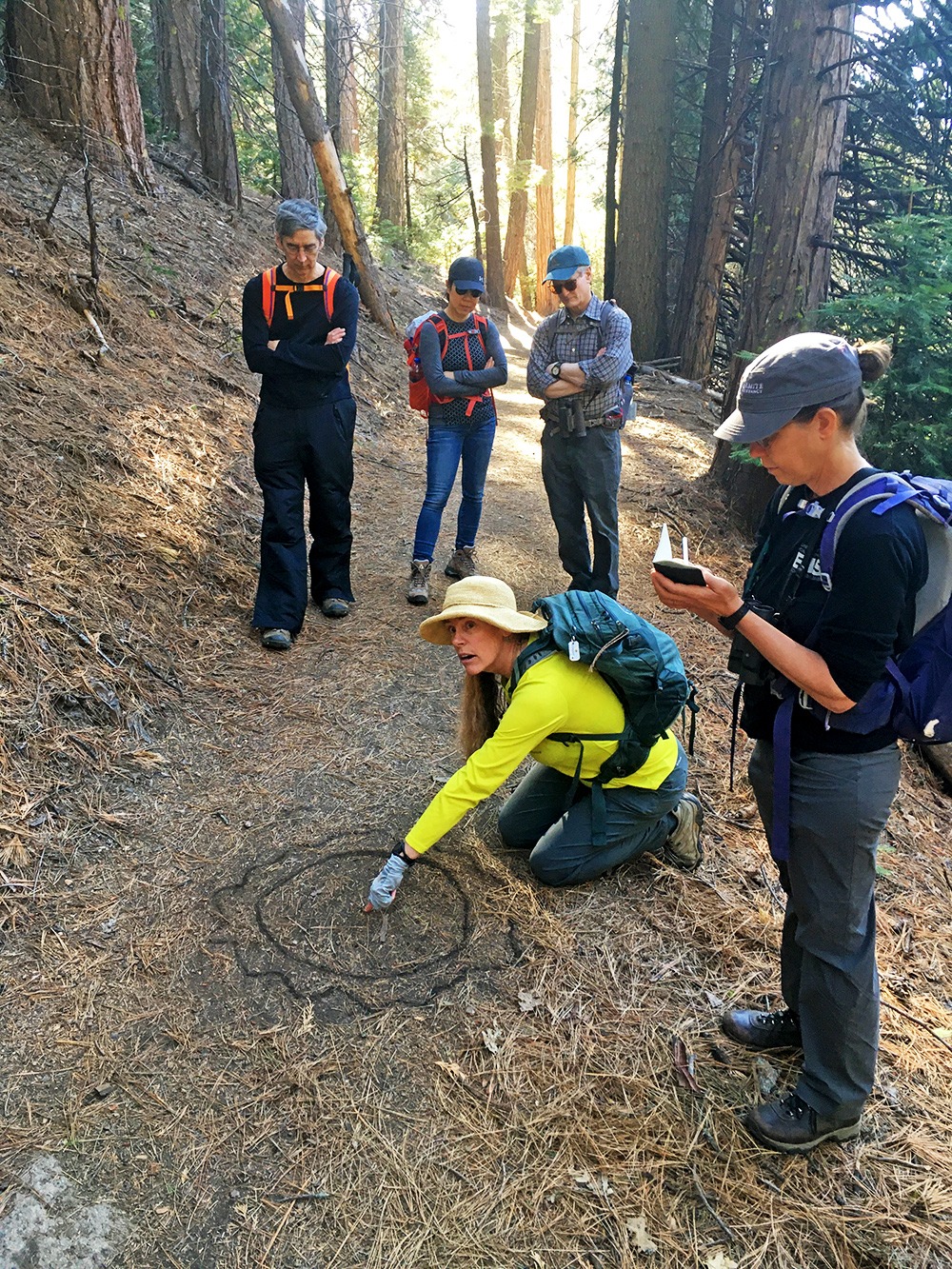 Hiking with an expert scientist of the region is one thing, but Shirley is also an artist and oral historian. She would point out the various differences in hues between the pine and fir trees, and the textures of bark that expanded like an accordion to allow the tree’s core to grow. She gave us photography pointers on how to capture the blue sky and the deep red tannins of the sequoias. She told stories of Galen Clark, who settled in Mariposa Grove and lived in harmony with the native people, and of John Muir, who would travel with a bag of flour to cook bread on a stick and a large bag of loose leaf tea to use as a pillow at night. 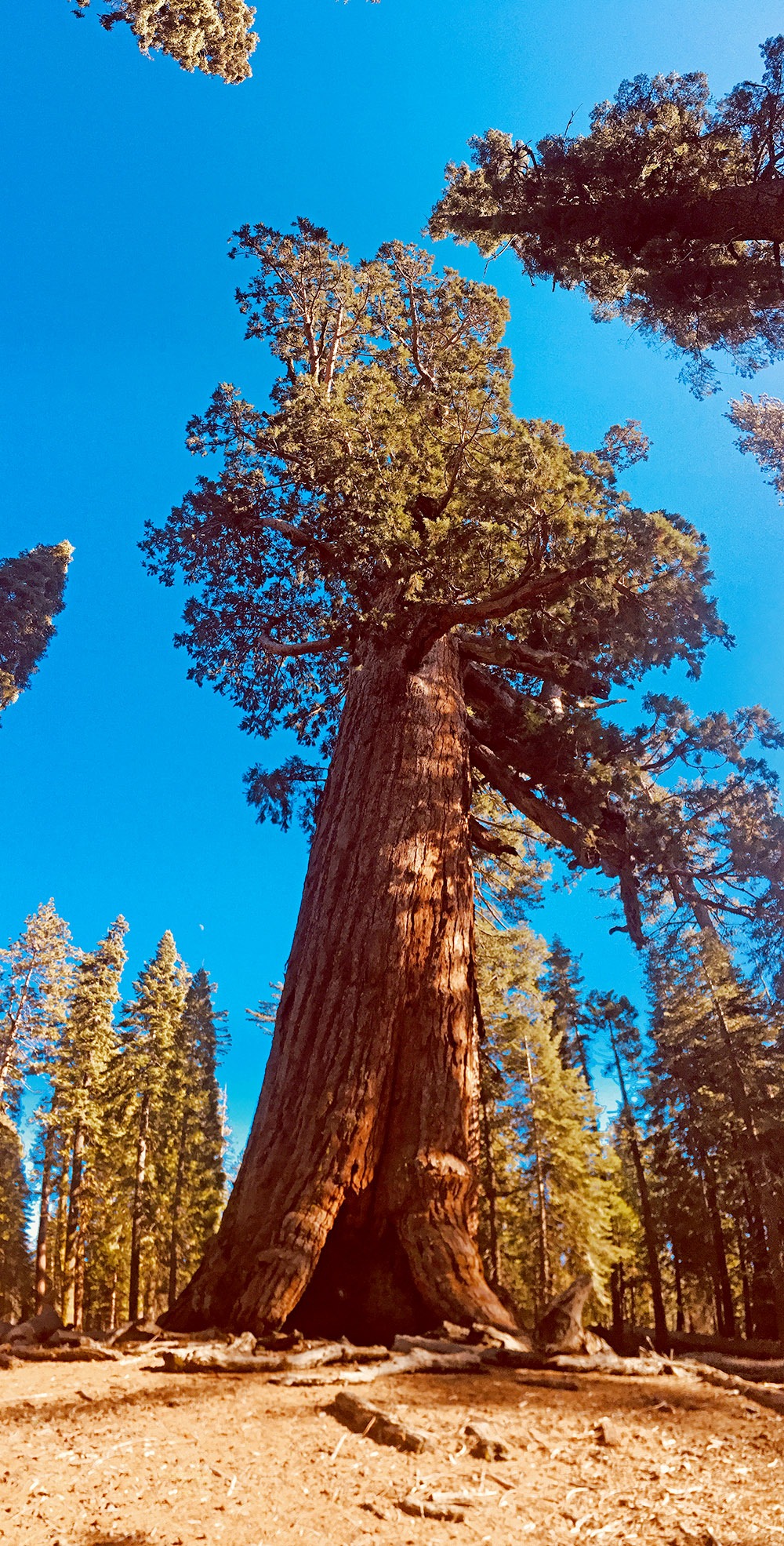 The star of the hike: the massive Grizzly Giant. Photo: Paul Boyd-Batstone.

Of course, the star of the hike was the Giant Grizzly, one of the most resilient trees in the world. Its estimated age is between 1,800 years and 3,000 years old. The diameter of one large branch is greater than the trunk of any pine tree in the entire grove. But surrounding the Grizzly are reminders of how the sequoias and the grove’s myriad botanical treasures are survivors that need protection from mindless incursions, air pollution, overgrowth of invasive species and other ecological threats. We are reminded that we are stewards of these great areas.

We learned about, and saw the results of, the multimillion-dollar project to restore Mariposa Grove so that people for generations to come can see these magnificent trees with minimal impact to their survival. Shirley reminded us of the Conservancy’s commitment to “inspire people to support projects and programs that preserve Yosemite and enrich the visitor experience”.

At the end of our walking tour of the grove, Shirley left us with a quote from John Muir: “Climb the mountains and get their good tidings. Nature’s peace will flow into you as sunshine flows into trees. The winds will blow their own freshness into you, and the storms their energy, while cares will drop away from you like the leaves of autumn.”

Thank you, Shirley Spencer and Yosemite Conservancy.  What more inspiration do we need? 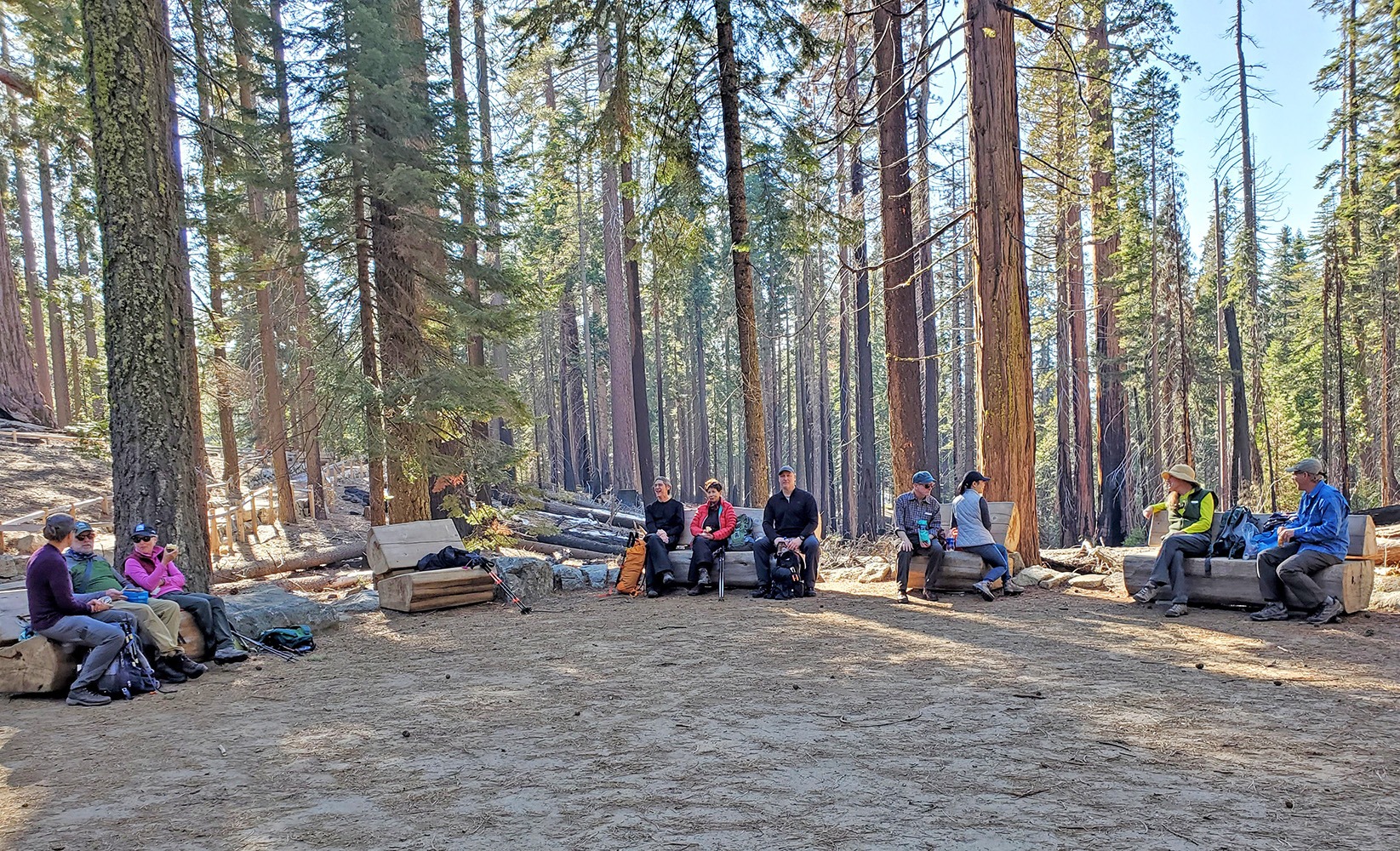 The group of adventurers enjoys a well-earned break on the benches below the Grizzly Giant. Photo: Judith Cantrell.

We’re grateful to Shirley and our other naturalists, to all of our adventure participants, and especially to Paul for sharing his experience and supporting the park! Do you have a story you’d like to share from one of our Yosemite programs? Email us: [email protected].

To see upcoming adventures and other activities in the park, check out our events calendar.

About the author: Paul Boyd-Batstone, professor emeritus from the College of Education at California State University, Long Beach, and his wife, Nancy, have supported Yosemite Conservancy for over 15 years. Paul’s parents honeymooned in Wawona in 1949, and celebrated their 50th anniversary at the Wawona Hotel; he’s been visiting Yosemite since childhood in the 1960s. 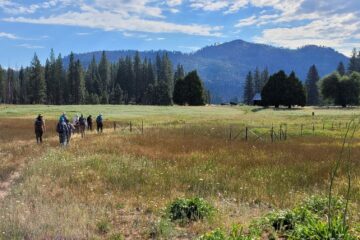