You probably know that woodpeckers get their name because they … peck wood. A lot. In addition to foraging for food or carving out nest cavities, woodpeckers use their tree-tapping talents as a communication tool. Unlike songbirds, woodpeckers don’t have a wide range of vocal stylings, so use their percussive prowess to mark territory or show off for potential mates. Drumming tempos vary, but some species can beat their beaks against trees as many as 20 times per second.

Here are a few things you might not know about woodpeckers …

Worldwide, there are more than 200 Picidae species; of those, a diverse dozen can be found in Yosemite. Hoping to spot a woodpecker on your next trip to the park? Take a glance through the different species to see which ones you might encounter!

1. Acorn woodpecker. These red-capped tree-nut-hoarders are abundant all year in the park. As you’d expect, they hang out around oak trees, at relatively low elevations (2,000′-5,000′). [Photo: Ann & Robb Simpson]

2. Hairy woodpecker. Despite the name, these black-and-white larvae-lovers are coated in feathers, not hair. You’ll find them in Yosemite year-round, in a variety of habitats, including conifer, hardwood and riparian areas, from 2,000 feet all the way up to 10,000 feet. [Photo: Pixnio]

3. Nuttall’s woodpecker. These small, chisel-billed birds are common in Yosemite, but unique to the West – their range is largely limited to California’s oak woodlands. Based on their name, you’d assume they eat all nuts, but they prefer to dine on ants, beetles and other tree-dwelling insects. (They’re named for Thomas Nuttall, a 19th-century botanist and bird-lover). [Photo: Dawn Beattie, CC-2.0 (creativecommons.org/licenses/by/2.0/legalcode), cropped]

1. Northern flicker. Keep an eye out for these dashing brown birds (known as Pic flamboyant in French) in Yosemite in spring, summer and early autumn, when they frequent meadows, pine and oak forests, and riparian areas across a huge elevation range (2,000′-10,000′). (Pro tip: Look down! Flickers often feed on the ground.) [Photo: Yosemite Conservancy/Ryan Kelly]

2. Red-breasted sapsucker. Sporting scarlet heads and chests, these striking sapsuckers are most plentiful in the park in spring and summer months, when you might catch sight of them among riparian hardwoods or in conifer forests, between 2,000 feet and 8,000 feet. [Photo: Ann and Rob Simpson]

1. Downy woodpecker. If you spy a bird that looks like an undersized hairy woodpecker with a dainty beak, you’ve probably spotted this petite species; downy woodpeckers are uncommon in Yosemite, but are sometimes seen in riparian and hardwood habitats at low elevations (2,000′-4,000′). [Photo: NPS/Ron Harden]

2. Williamson’s sapsucker. This species’ look varies wildly by sex: Males have black heads and bodies with sparse white stripes; females have brown heads and a salt-and-pepper pattern on their backs. Regardless of sex, they’re uncommon in the park, but you might catch a glimpse of one pecking at a pine in lower parts of the high country (6,000′-9,000′). [Photo: NPS]

3. Pileated woodpecker. With fiery red crests and 2-foot wingspans, pileated woodpeckers are easy to identify – if you can find them. This crow-sized Picidae are relatively rare in the park, but if you’re between 4,000 feet and 7,000 feet, you might spot one foraging for bugs in dead wood. [Photo: Carolyn Botell]

4. Black-backed woodpecker. This elegant bird, which sports tuxedo-esque outerwear and often opts for burned areas, is uncommon in the park, but you might catch a glimpse in upper montane coniferous forests (7,000′-9,000′). [Photo: USFWS]

1. Lewis’s woodpecker. Named for Meriwether Lewis (of Lewis and Clark fame), these birds stand out from their Picidae peers in a few ways, including their eating habits (they often go for airborne food) and feather color (pinkish red, green and gray). They cover a wide elevation range in Yosemite (2,000′-10,000′), but are rare in the park; still, keep an eye out if you’re hiking through hardwood and coniferous forests in spring, summer or early fall. [Photo: Pixnio]

2. Red-naped sapsucker. This scarlet-necked sap-sipper, known for drilling small wells in willows and other hardwood trees, is rare in Yosemite, but sometimes seen in spring, late summer or fall, between 2,000 feet and 7,000 feet. [Photo: USFWS/Tom Koerner]

Want to learn even more about Yosemite’s birdlife? Join one of our naturalist guides for a scheduled bird-watching wander (including our autumn woodpecker walk), or contact us to set up your own avian-focused Custom Adventure.

Above: A white-headed woodpecker perched on a tree in western Yosemite Valley. Photo: Yosemite Conservancy/Keith Walklet 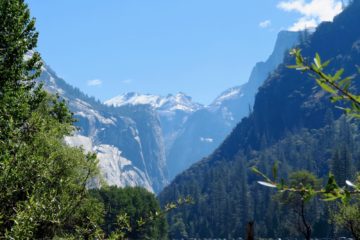 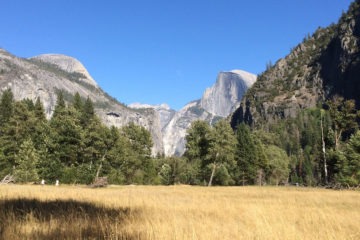