Glaciers – created when fallen snow builds up, eventually amassing so much weight that the underlying layers morph into ice and start flowing downhill – formed at numerous times in Yosemite’s geologic history; most are long gone. 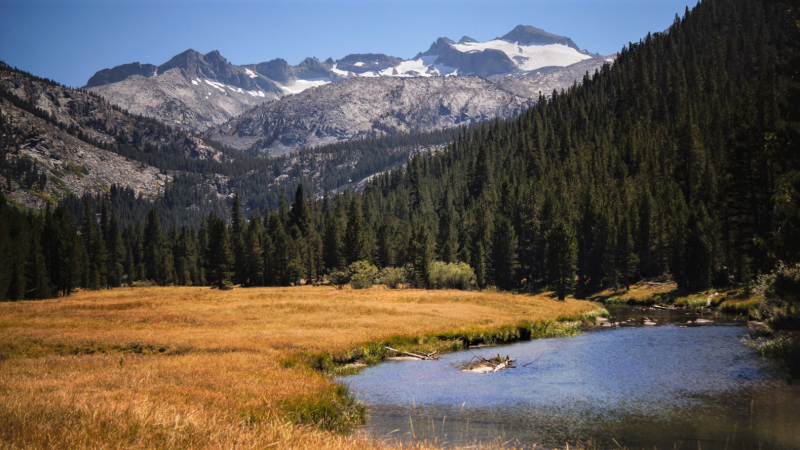 Mount Lyell, Yosemite’s highest peak (13,114 feet) rises out of the southeastern end of the Cathedral Range. This impressive peak and nearby Mount Maclure (not quite visible in this view from Lyell Canyon) have long drawn researchers searching for clues to the park’s glacial past, present and future. Photo: Ted Hunting.

Today, you’ll find remnants of Yosemite’s glacial past along the park’s eastern border, on the upper slopes of a pair of Cathedral Range peaks: Mount Lyell and Mount Maclure.

Every year, as summer sun warms the mountains, frigid meltwater from those lofty neighbors streams down into the Tuolumne River. With support from donors, scientists are studying how vital that water source is to the river’s annual flow.

They’re racing against time, because the ice is vanishing – fast.

Studying Yosemite’s glacial ice is hardly a new endeavor. Scientists have been studying the park’s glaciers for more than a century. John Muir’s first published article, printed in the New York Tribune in 1871, highlighted his then novel idea that Yosemite’s landscape had been carved by glaciers – not by a giant earthquake, a popular theory of the time.

Two years ago, when picking flowers in the mountains back of Yosemite Valley, I found a book. It was blotted and storm-beaten; all of its outer pages were mealy and crumbly, the paper seemed to dissolve like the snow beneath which it had been buried; but many of the inner pages were well preserved, and though all were more or less stained and torn, whole chapters were easily readable. In this condition is the great open book of Yosemite glaciers today; its granite pages have been torn and blurred by the same storms that wasted the castaway book.” – Opening lines of “Yosemite Glaciers,” by John Muir (1871)

The following year, Muir and Galen Clark (the first guardian of the Yosemite Grant) trekked into the Cathedral Range to measure Maclure Glacier. On August 21, 1872, they drove five wooden stakes into the ice at carefully spaced intervals. Six and a half weeks later, in early October, they measured how far the stakes had moved. Their conclusion: The wood (and ice) had moved 47 inches, or about one inch per day. 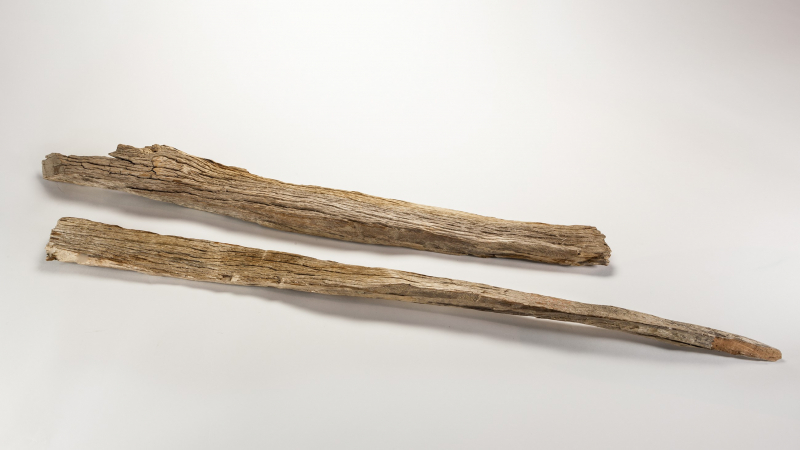 These wooden stakes, found by a glacier survey team on Mount Maclure in 1932, are thought to have been fragments of the ones that John Muir and Galen Clark used to measure the ice’s movement in the 1870s. Photo: NPS (YOSE 9577).

The 21st-century results: Maclure Glacier was moving at the same rate as in Muir and Clark’s day (potentially because meltwater helps serve as a lubricator, accelerating flow even as the glacier shrinks). The ice on Mount Lyell had stopped moving altogether. Glaciers, by definition, move. When Lyell Glacier halted, it shifted, in geological terms, from glacier to ice field. Maclure Glacier is the last living glacier in the park.

That study and others in the decades since the 1872 survey trace a clear trend: Yosemite’s glaciers are shrinking.

When the two glaciers were first mapped and photographed in the early 1880s, Lyell Glacier covered just over 1.2 square kilometers, and the smaller Maclure Glacier covered about 0.4 square kilometers. By 2015, the picture had shifted dramatically. Maclure Glacier had lost more than half of its area. Lyell Glacier had shrunk by nearly 80 percent, and its east and west lobes, once connected, had split into three discrete pieces. Scientists project that both glaciers will disappear within the next couple of decades.

The Maclure and Lyell glaciers have been retreating steadily since they were first mapped in 1883. Recent snowy winters helped alleviate some impacts from the multiyear California drought, but did little to delay the glaciers’ disappearance. (Images and data courtesy of NPS).

In 2018, through another Conservancy donor-supported study, researchers began considering what might happen once the ice disappears.

Scientists already know that Lyell and Maclure Glaciers are a major source of water for the Tuolumne River, especially in late summer and early autumn, when snowmelt from surrounding peaks tapers off. As it flows through the river, meltwater from the glaciers helps sustain habitat and life in the park – including human life!

To better understand the relationship between the glaciers and the river, researchers drew on a vast store of data gathered using airborne lasers. (The data-collection technique, known as LiDAR, uses light waves to measure distances.) LiDAR comes in handy for a variety of research and planning activities, such as mapping built and natural environments, and studying the structure of forest canopies. When used for glacier research, LiDAR can provide a wealth of detailed, accurate data on ice surface area and elevation.

Using LiDAR data from recent years (including an extended drought period, when 10 percent of the glaciers’ historical ice loss occurred in just four years), scientists calculated that overall, Mounts Lyell and Maclure lost as much as 3.8 million cubic meters of ice between 2012 and 2016, which in turn led to an influx of meltwater (up to 3.7 million cubic meters) flowing into the Tuolumne River. 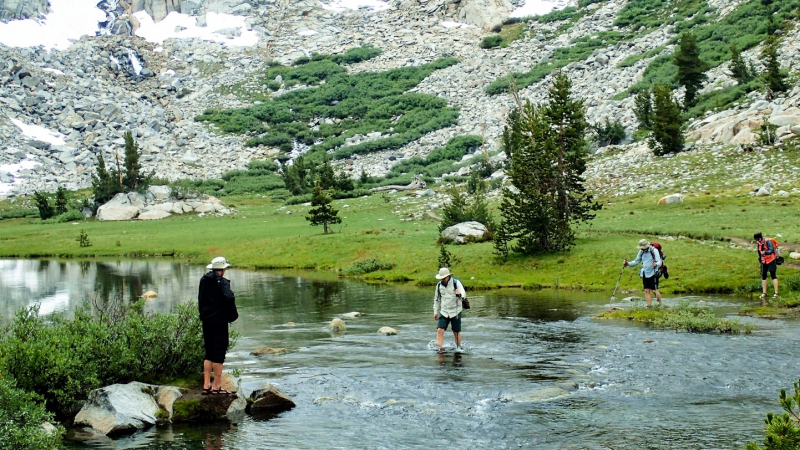 Participants in a Yosemite Conservancy Outdoor Adventure to Mount Lyell cross the Lyell Fork of the Tuolumne River, which is fed by meltwater from the Lyell and Maclure glaciers. What will happen to this tributary and the river downstream as the ice disappears? With support from donors, scientists are investigating that question. Photo: Roy Williams Photography.

By using the LiDAR measurements and stream gage data, scientists hope to better understand how crucial glacial melt is to the river’s flow, especially during dry months or drought years. As they gathered and analyzed data, they explored key questions: How crucial is glacial melt to the Tuolumne River? If the ice vanishes, will the Lyell Fork dry up entirely during drought years? How would that affect water availability downstream? Ultimately, their work will help inform decisions about how to prepare the park for a glacier-free future.

Later in the year, the research team headed back to Yosemite’s eastern edge for another round of surveys, racing to gather data — and to experience the ice fields that have captivated scientists and adventurers for decades — before the glaciers are gone. 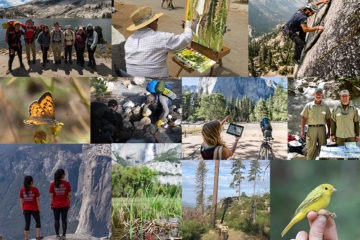 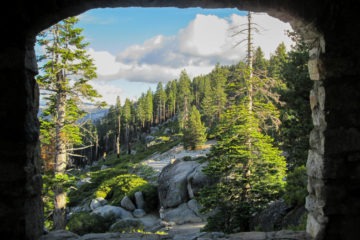