“Yosemite inspires daily and in difficult times,” said Yosemite Conservancy President Frank Dean. “It feels more important than ever for the Conservancy to support improvements all around the park, to preserve its natural and cultural wonders, and to offer ways for people to connect with Yosemite in person and from afar.”

“Our 2020 projects are a powerful testament to our donors’ generosity and love of the park,” said Dean. “They also speak to our positive and productive partnership with the National Park Service, and to the incredible dedication of our staff and partners to have our work continue in a meaningful way during this turbulent year.”

Restoration projects that Conservancy donors are supporting in 2020 include repairs on popular trails in Yosemite Valley, including the Mirror Lake, Yosemite Falls and Four Mile trails, as well as California Conservation Corps crews’ work to improve backcountry trails. Work is also underway to revitalize wetlands in eastern Yosemite Valley by planting native vegetation and installing a boardwalk to enable people to cross the area without harming habitat.

In Yosemite Village, historic preservation experts repaired a stone fireplace in the 100-year-old Rangers’ Club, which is a National Historic Landmark and the product of early 20th-century park philanthropy.

As restoration projects move ahead on the ground, Dean said several Conservancy-supported educational programs adapted to the pandemic by shifting to virtual platforms. “We’re all trying new things and making daily adjustments as we search for a new equilibrium,” he said.

Some Conservancy-supported youth programs, including Adventure Risk Challenge, WildLink and the Yosemite Leadership Program, have adjusted by engaging students in online activities, in addition to or instead of their usual in-person programming. While in-person “Ask a Climber” activities were paused, climbing rangers shared a “day in the life” look at their work on the walls via video. The annual Parsons Memorial Lodge Summer Series, which features presentations by writers, researchers, artists and adventurers, was shared with an online audience through videos posted on Facebook and on the Yosemite National Park and Conservancy websites.

The Conservancy also supports the park through a variety of visitor programs and retail operations. The pandemic prompted the cancellation of many of the Conservancy’s usual activities in the park for the 2020 season, including volunteer programs and Yosemite Theater shows. Still, the organization continues to support visitor education and engagement in the park, including by offering naturalist-led adventures and custom art classes, operating a contact-free bookstore in Yosemite Village, and managing the online wilderness permit process. The Conservancy’s four webcams, which show El Capitan, Half Dome, the High Sierra and Yosemite Falls, have continued to help people connect with the park from afar.

Thanks to generous donors, the Conservancy has provided over $130 million in grants to the park to restore trails and habitat, protect wildlife, provide educational programs, and more. The Conservancy’s guided adventures, art classes, volunteer opportunities, wilderness services and bookstores help visitors of all ages to connect with Yosemite. Learn more: yosemite.org or 415-434-1782. 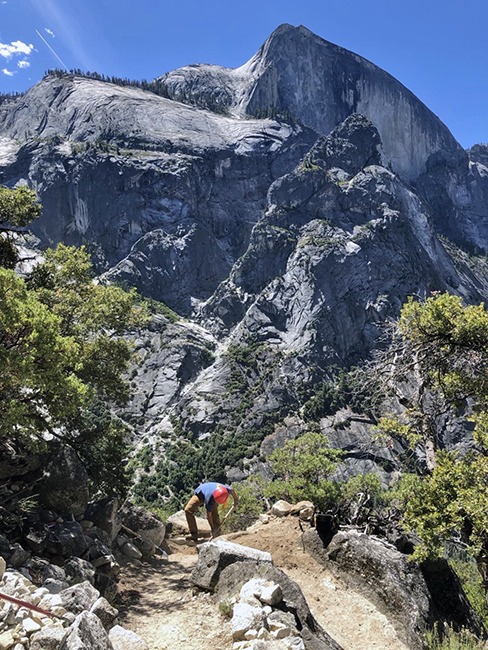 A California Conservation Corps crew member works on the Snow Creek Trail as part of a Conservancy-supported restoration project. Credit: Courtesy of NPS.

A researcher searches for signs of Sierra Nevada bighorn sheep in the Cathedral Range. The Conservancy has supported efforts to reestablish the endangered wild sheep in the Yosemite area. Credit: Courtesy of NPS.