A version of this story appeared in Yosemite Conservancy’s November 2020 magazine.

For millennia — long before map lines and the notion of owned acres demarcated the geography — the ancestors of today’s tribal members lived and traveled in the Sierra Nevada, from the eastern Sierra to areas known today as Tuolumne Meadows, Yosemite Valley, Hetch Hetchy and Wawona, and into the western foothills and beyond, as they gathered and hunted, visited friends and family, and took care of the land and water that sustained them and all life.

When miners, ranchers and homesteaders flooded the Sierra in the mid to late 1800s, many Indigenous people were killed or forced onto sometimes short-lived reservations, their food sources and homes destroyed, and their children sent to boarding schools for cultural assimilation, a brutal practice that continued into the 1970s and whose effects are still felt today. 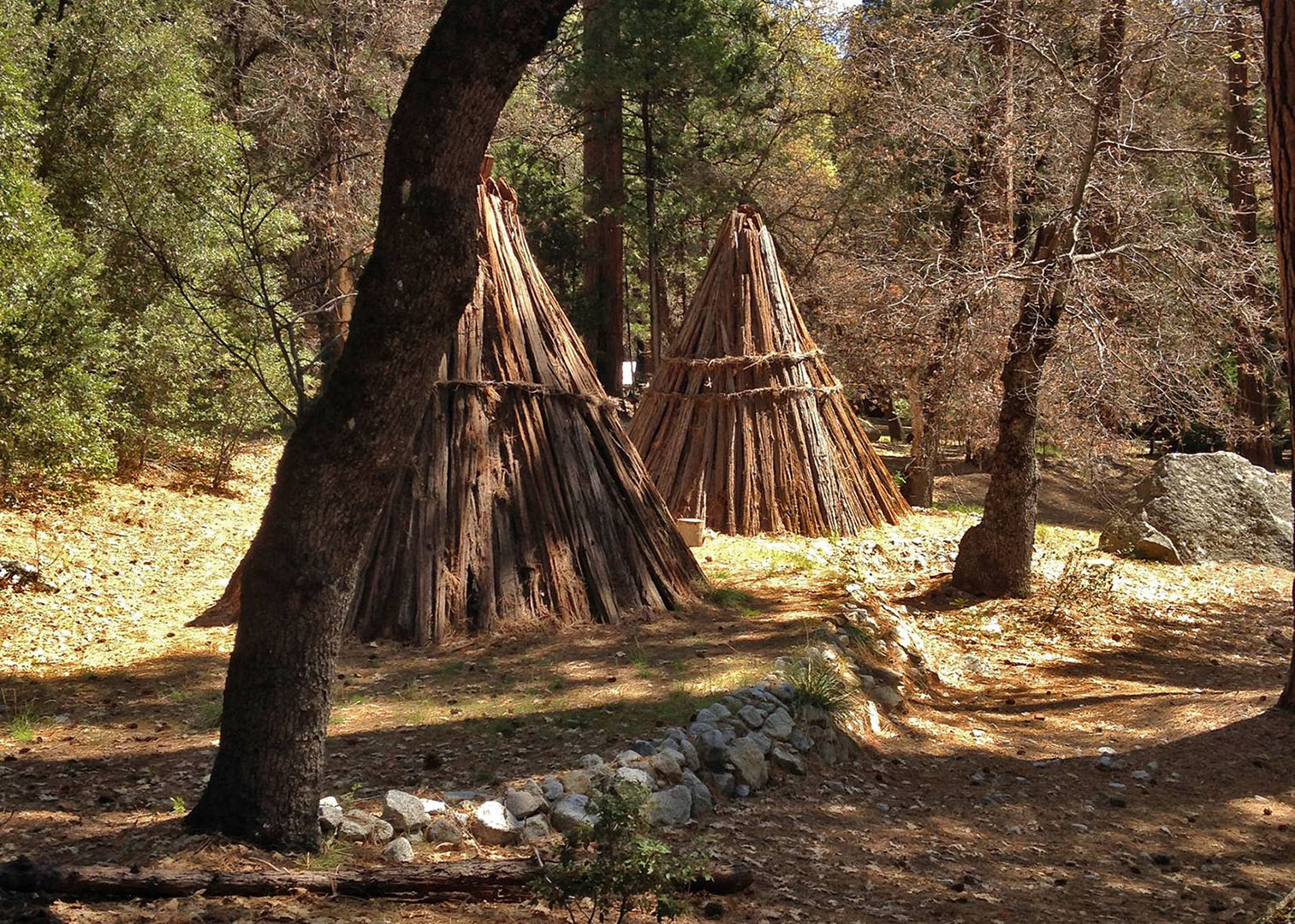 Bark-covered umachas, built as part of a larger, ongoing project to re-establish a cultural space for affiliated tribes in Yosemite Valley. Photo: Courtesy of NPS

The tribes endured genocide, eviction and exploitation. But their presence as caretakers of the land is not consigned to history. Today’s tribal members continue the stewardship traditions of their ancestors, including languages and stories as diverse as the peaks and valleys of their homeland, but they all share an intrinsic connection to each other and to the park, as its original, continuing and future stewards.

For decades, the seven tribes have worked together, as the “traditionally associated tribes and communities of Yosemite,” and with the National Park Service, to continue stewardship of their homeland.

Federal law requires the NPS to consult with tribal governments, sovereign nations, on projects that may affect archeological sites and places of religious and cultural significance. Liz Williams, Yosemite’s cultural anthropologist and tribal liaison, facilitates those consultations. She cites an increased focus on educating park staff about the intergovernmental relationship, including by attempting to incorporate elements of traditional ecological knowledge, such as prescribed burning, into park resource management.

Ultimately, Williams says, the relationship between the park and the tribes is about taking a collaborative approach to caring for natural and cultural resources. “We have a lot to learn and a lot of work ahead of us,” she says. “Yosemite Conservancy’s support is critical in this mission.”

NPS and Yosemite Conservancy representatives have consulted with tribal members on restoration projects, such as at Mariposa Grove and Bridalveil Fall. One outcome of those collaborations is educational signs written by tribal members that share stories and ecological insights.

In 2019, the seven tribes completed a book, Voices of the People, which features contributions from each tribe, covering history, personal recollections, environmental stewardship, and a common thread of resilience and hope for the future. The book, which is not yet publicly available, gathers vital tribal perspectives on Yosemite’s past and present that aren’t captured in popular, often Eurocentric narratives about the park.

Learning from and working with the tribes on education and conservation is critical to the future of Yosemite, Williams says — and to ensuring visitors are aware of its first, and continuing, stewards. As the seven tribes wrote on a sign that now stands in Mariposa Grove: “As you walk through this park, remember who walked here before you, and who will walk here after you. We ask that you respect this place, so that our people can continue to enjoy these lands like our ancestors have.”