From YLP to NPS 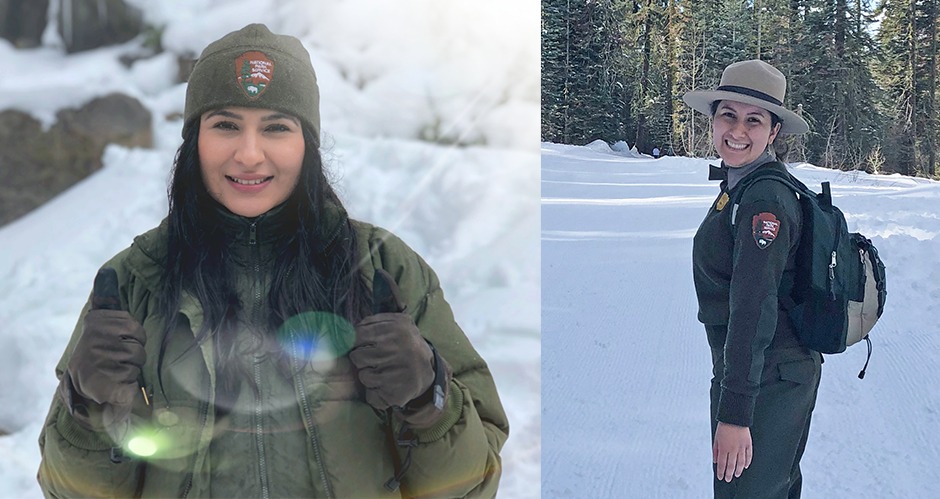 How has your YLP/WEC experience shaped your career?

Gutierrez: As a child, I thought I would be a teacher or a lawyer. I had plenty of outdoor experiences, but park ranger was not a job I knew existed. The rangers I met through YLP made me feel like I mattered to national parks, which helped me build a strong sense of stewardship. I wanted to be that connection for others.

Cardoso: Not long ago, I didn’t know what a national park was. YLP and WEC not only exposed me to national parks, but also gave me mentorship and tangible tools that help me inspire low-income students and families to establish sustainable relationships with parks and natural lands.

You both studied natural sciences at UC Merced. How have your park experiences affected your understanding of the natural world?

Cardoso: Working in parks gives me the chance to turn abstract ecological concepts into tangible ones. The biologist in me is curious to observe how biotic and abiotic factors maintain ecosystems; the educator in me is ready to show others how everything in an ecosystem is connected. My park experiences have also shown me the significance of acknowledging the indigenous people who shared these ecosystems.

Gutierrez: I’ve learned so much about how park resources interact and how we are managing them. It can be hard to see how heavy our impact is on the world. But the more I’ve learned about Yosemite, the less I feel that weight. I’ve seen historic photos of domestic sheep in park meadows, and I am amazed to see the same meadows today, lush with grasses, birds and butterflies. Sometimes we forget how robust ecosystems are. I have the privilege of working with those systems in Yosemite and educating others about them. 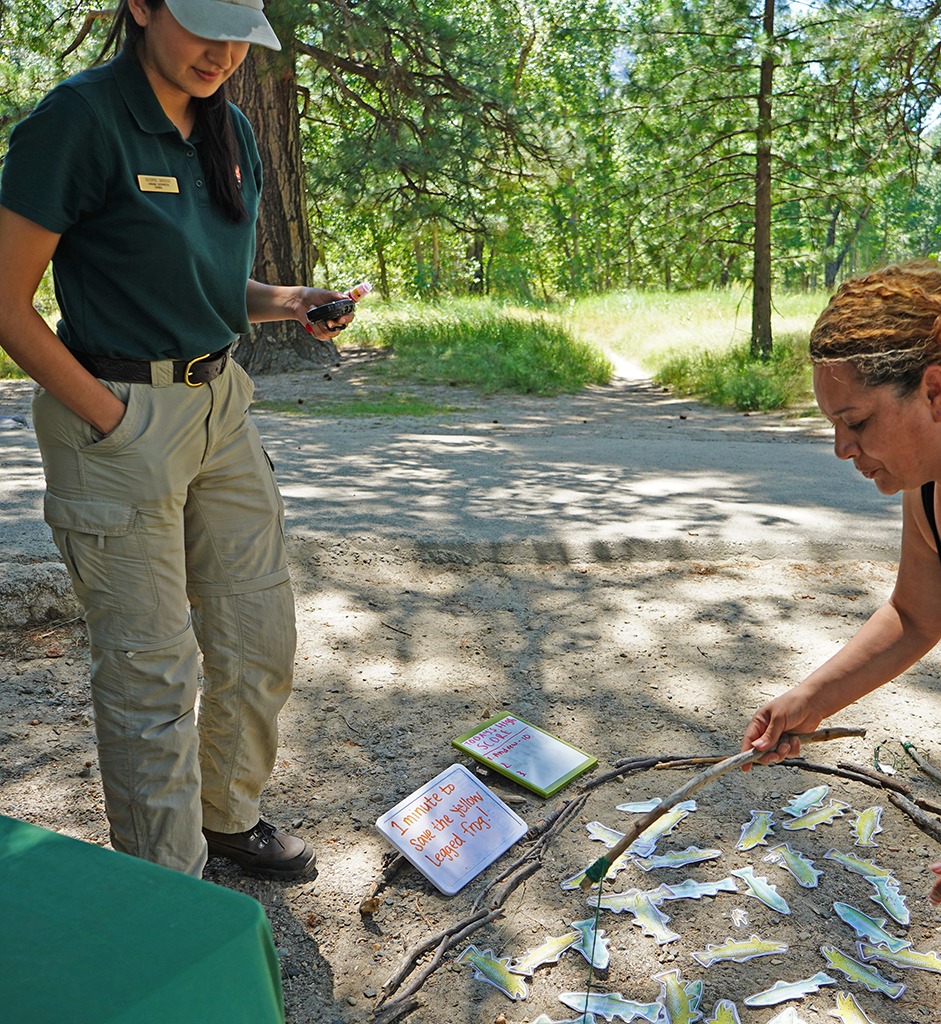 A visitor learns about endangered frogs while participating in an amphibian-focused !Aventura Yosemite! activity in Yosemite Valley in 2019.

Socorro, you’ve played a key role in expanding Spanish-language programming in Yosemite in recent years, including by launching ¡Aventura Yosemite! Why were you inspired to pursue that opportunity, and what were you able to achieve?

Cardoso: I was inspired to create ¡Aventura Yosemite! because as someone who identifies as Mexican-American, I wanted the Spanish-speaking community, specifically Latinos, to feel welcomed in their native language and included in Yosemite’s interpretive programs, regardless of their race, nationality, language, sexual orientation or ability. I wanted them to feel connected to Yosemite, and to acknowledge that their culture, traditions and stories belong here, too.

My greatest achievement was being able to establish meaningful connections with Spanish-speaking communities by hearing their stories of visiting Yosemite, developing and delivering informal educational programs, going beyond the park’s boundaries by posting bilingual posts on Yosemite’s social media platforms, and creating an introductory video in Spanish about navigating Yosemite Valley.

Mirella, as an interpretive ranger, how do you incorporate ecology into your work?

Gutierrez: I’ve found that most of the questions I get from visitors are about why things are the way the are.  For example, why are there so many tree stumps? Why is there no water in Yosemite Falls? Do I need to worry about a bear eating me? 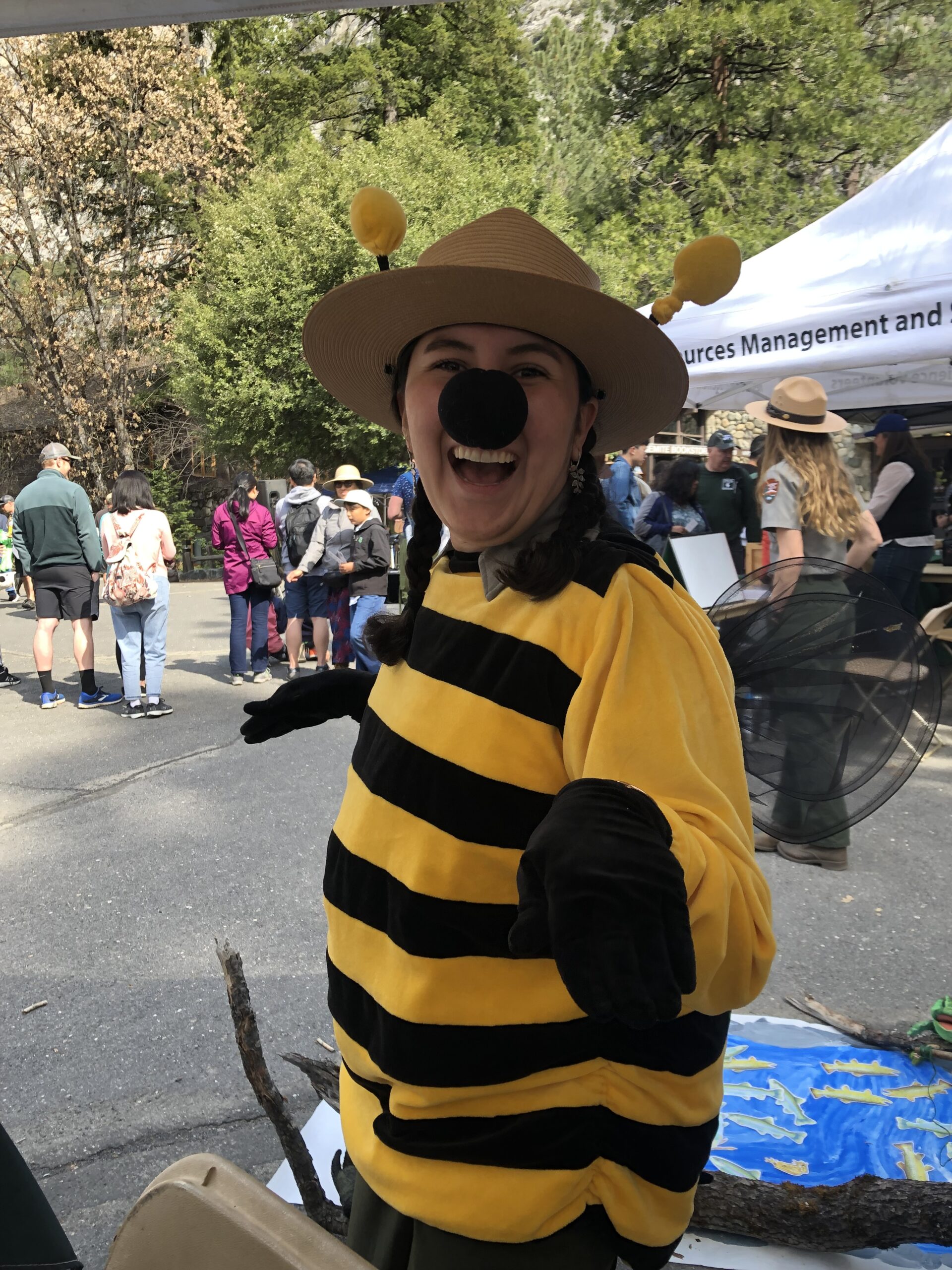 Always bee ready to learn from the natural world! Mirella Gutierrez gets into character to educate visitors about pollinators and ecology during an April 2019 event in the park.

The common thread among these questions is that they involve something that impacts the visitor’s experience, and most of my responses involve ecology. I love talking about the grander picture of Yosemite and how that plays into how the park looks and how management decisions are made. Helping people focus on the specialized habitat they are visiting and the amazing biodiversity of the flora and fauna around them can build a sense of wonder and understanding at how the ecosystem functions even with us in it. People start to see how changing one part of the ecological system by their actions can have a bigger impact than they might have initially thought. When the visitor gives the “aahhhhh” look, I know that even after we stop speaking there is a good chance that their new understanding can empower them to change how they interact with national parks.

Why are educational programs, such as YLP, important for parks?

Cardoso: Programs like YLP, WEC and ¡Aventura Yosemite! uplift people of all ages, ethnicities and abilities to take ownership of a park’s natural and cultural heritage. They helped me discover my own sense of environmental stewardship — and my career.

Gutierrez: These programs give the next generation a seat at the decision-making table for public lands. YLP pulls together diverse individuals with a shared stewardship mission; that diverse mentality is critical for managing parks and other places. YLP has given me and others the opportunity to have our voices heard and prepare for careers in the parks.

Main image: Photo of a ranger hat in Yosemite, taken by a 10-year-old Parks in Focus participant (courtesy of Udall Foundation). A version of this story appeared in the May 2020 issue of Yosemite Conservancy magazine.